One of the first things I noticed upon my arrival in Manhattan is that New York’s Bravest – which is what N.Y.’s fire fighters are called – take the use of sirens to a whole new level compared to their European counterparts. They go all Vegas on you and put on a show that draws enormous attention, adding bright colourful neon lights and loud air horns to their sirens, leaving their audience in awe. What gives fellas (and of course fellasitas)?

When any European sets foot upon the island of Manhattan it won’t take them long to be thrown of their feet by a fire truck rushing past. Mentioning the words ‘fire trucks’ to some of my fresh-off-the-boat friends here always leads to the same response: “What’s up with their sirens and why all the loud honking?” Bear in mind that these friends are all well-travelled people, no strangers to the world. They have heard sirens many times before in other large metropolitan areas like London and Madrid. But still, they are in shock. In Truck Shock. Symptoms are confusion, disbelief, widening of eyes, clenching of the face and covering of ears. Never been to NYC? Play this video over a decent sound system and turn the volume up to at least 80 decibels to get the gist.

Earplugs
What causes this Truck Shock? Firstly, it’s the sirens. Not only do they seem to be much louder than in Europe, they are also all over the place. Or, as my husband Nick puts it: “They’re extremely indecisive.” Where European emergency vehicles produce a consistent, repetitious sound, here it’s almost like the sirens are trying to experiment with a melody. But in the same kind of way a child does when he’s learning his first song on the instrument he just started to play: utterly annoying because it’s so hard to follow. This leads to confusion and is the first stage of Truck Shock. Secondly, the trucks here are equipped with air horns. This is overwhelming, not only because they add a new dimension. It’s mostly because the drivers are incredibly keen on honking these Extremely Loud Air Horns. This causes the second stage of the shock, which leaves you deeply startled. Americans new to this city might be familiar with the indecisiveness of the sirens, but are still likely to get Truck Shock just by experiencing the overwhelming loudness of the air horns. My friend Lindsey, originally from Dallas, is looking for a way of dealing with it: “I think I need to invest in some earplugs.”

‘Immediate attention getter’
When I first heard the air horns, I thought it was a back-up thing. Something firemen and women could use to put some extra pressure on traffic to get out of their way. I therefore also thought I would only hear it on the clogged avenues of Manhattan. But when I moved to the serenity of Brooklyn Heights, I discovered that an entirely empty street – whether it’s in bright daylight or in the dead of the night – won’t stand in the way of a fire fighter’s compulsive need to air horn. Dare I say that New York’s Bravest have a bit of honking fetish?

FDNY fireman Laurie Galioto, who for whatever reason describes himself as ‘an argumentative Peter Pan’, says: “Given the frequency of sirens in the city, motorists become sound blind and the air horn is an immediate attention getter.” FDNY spokesperson Frank Dwyer agrees: “Air horns were added to provide an additional warning device to the vehicles to protect the citizens of NYC.” A good decision, since research from the late 90s shows that a few factors make it more difficult to hear sirens: “Soundproofing in modern cars […] has become more efficient. […] This, coupled with louder radios and stereos, air conditioner noise and any wind or road noise inside the cabin has made it more difficult for drivers to hear an approaching emergency vehicle […], especially in cities with tall buildings and on roads with heavy traffic where the sound is reflected from many different directions.”

Most fire trucks in The States are equipped with air horns today. The FDNY seems to have been ahead of its time. The first air horn was already used on the 1956 American LaFrance (ALF) 85 Ft. Tiller, according to spokesperson Dwyer.

Now, I am all for safety and efficiency when it comes to rescuing people. Who wouldn’t be? So I won’t fight the benefit and necessity of the air horns. But I do think that when they were put onto trucks, New York’s fire fighters discovered they really, really liked them. And maybe felt ‘an excessive and irrational commitment’ to honk them.

Law abiding drivers
What about noise pollution though? This is considered a general social problem. There are laws to minimise or regulate noise pollution, like State Truck Air Horn Laws. The sound that truck air horns produce reaches about 80 to 90 decibels. A 90-decibel sound can cause deafness, but serious injury happens only if the person is constantly exposed to the sound. Therefore Truck Air Horn Laws have been implemented in most states in the U.S., predominantly between the 1950s and the late 70s. The main purpose of the law is to ensure that truck air horns are not used for any purpose except to give warning. In New York you can get a $350 fine if you honk in a situation that’s not an emergency. Few tickets seem to be given out, but in my opinion a lot of motorists in N.Y., specifically taxi drivers, are more than eligible to receive one of these pricey punishments. NYC’s fire fighters are always on their way to an emergency, so making a case for noise pollution is out of the window. New York’s Bravest can freely honk away – even on completely deserted streets – without breaking the law.

In New York you can get a $350 fine for honking

Exalted status
Talking to some of my European friends about the city’s Bravest made me realise that it’s not only the sirens and the use of air horns that’s different to Europe. Firemen and women in the U.S. are seen as true heroes. And there’s no doubt that they should be, according to Lindsey: “They’ve chosen a career that places themselves in potential danger every day to help others.” The FDNY has a Facebook page with nearly 450,000 likes, on Twitter they have almost 165,000 followers. Admiration on these social media channels is elaborately shown by frequent use of the word ‘hero’ in comments and replies. But you’ll also come across ‘proud of our men’, ‘great job’, ‘bravery’ and ‘thank you’ scores of times. It’s not that people elsewhere don’t consider fire fighters do a wonderful job, it’s just that they’re not given the same exalted status as in America. Except amongst children under the age of 7 that is. My British friend Tess told me: “Obviously we truly respect the work they do day in, day out, but it doesn’t feel to me that we put them on a pedestal.” Dutch people have a very similar attitude: “Despite the wonderful job they do, we are too down-to-earth to actually call them heroes. We don’t like to put certain people above others, I suppose”, states Britte from Amsterdam. In America there’s a strong consensus it’s OK to put people on a pedestal and dish out appreciation. In New York, even the garbage men have an honourable title. Where fire fighters are The Bravest and N.Y.’s policemen and women are The Finest, they get to be The Strongest. In fact, as a tribute to the city’s 6,200 uniformed garbage collectors, the City Council re-named a three-block section of Manhattan the ‘Avenue of the Strongest’.

Honk away!
Even though they’re not officially breaking any laws, FDNY spokesperson Dwyer informed me that ‘members discretion dictates the use of air horns in the field’. I’m not sure how much discretion NYC’s fire fighters are willing to show though. And that’s probably because ‘New York’ and ‘discretion’ don’t mix very well. I mean, let’s face it. This is New York City. It’s bigger than life itself. People move to this city with uninhibited ambitions and dreams. I’ve noticed even the homeless people have a bit of an attitude here. And if anybody is entitled to have a bit of an attitude in this unparalleled city, I’d say it’s New York’s Bravest. Let’s not forget 343 members gave their lives and saved 25,000 people on 9/11. Fires continued to burn for 99 days after the attacks. There were 75 firehouses in which at least one member was killed. But hear this: they responded to 45,476 fires in 2015, which is about 125 a day. As if that wasn’t enough for 2015, add another 245,509 non-fire emergencies (defined by the FDNY as ‘utility emergencies, and other emergencies that are not fire or medical related’) and 269,951 medical emergencies (‘life-threatening emergencies that engine companies respond to as first responders’). That clarifies Tess’s observation: “They are literally everywhere, all the time.” And it might explain Lindsey’s statement: “N.Y.’s firemen are definitely seen as local celebrities and I also feel like they’re much more visible here than in Dallas.” 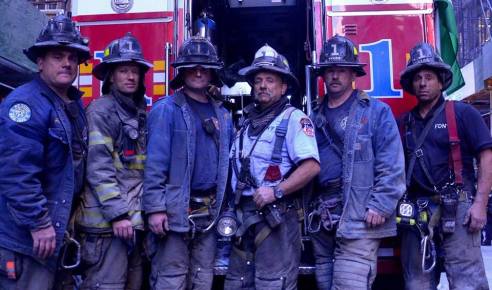 So, yes, being new to this island might give you Truck Shock. This can be startling for sure, but how harmful is it really? Let’s fully embrace their hero status, leave any aloofness behind and award these altruistic rescuers the freedom to honk loudly. Seek all the attention you need guys, and don’t bother with discretion. Honk away, New York’s Bravest. We’ll get used to it.

Check out these links to extend your knowledge on honking and N.Y.’s Bravest: