When the summer temperature in New York rises to ‘the high nineties’ (translation for all Celsiusites: when it gets unbearably hot and humid), you will need some help. Over the past few months, I’ve thrown my ignorant attitude of ‘I prefer having the windows open in my apartment and getting some natural air in’ out of the window, firmly closed that window and turned on the AC magic. It’s been a lifesaver. To prevent yourself from spending the entire summer indoors, you mix it up with a few weekends in the Hamptons, as New Yorkers do.

When you mention ‘I’m off to the Hamptons’ in 2016, every New Yorker understands that you’re saying ‘I’m going to get out of this city turned furnace and cool down near the beach where temperatures are milder, there’s a breeze and no skyscrapers around trapping the overwhelming heat’. But we have to travel back to 1879 to stumble upon the first use of the term ‘the Hamptons’. It was introduced as a marketing phrase by the Handbook of Summer Travel, a promotional brochure of the then-newly extended Long Island Rail Road (LIRR). It refers to the towns East Hampton and Southampton that make up the so-called ‘South Fork’ of Long Island, a thinly stretched peninsula east of New York City ending up in two patches surrounded by the Atlantic Ocean. Both towns include several hamlets and villages with crowd pleasers like Sag Harbor and Montauk. It was the Brits who paved the way for the marketing moniker though. This happened a few centuries earlier in 1640 when they named Southampton after the English community and it became the first English speaking settlement in New York. But today, this surely ain’t no Britannia. This is all New Yorkers summering: from student rabble to high society. Everybody is off to the Hamptons when Father Fahrenheit is heating up good old New York, following in the footsteps of TV and movie characters like Sex and the City’s Carrie Bradshaw or real-life icons like former mayor of New York Rudy Guliani.

To train or to chopper?
According to Business Insider ‘the only drag about going to the Hamptons is actually going to the Hamptons’. Which is why they produced a ‘cheat sheet’ to help all New Yorkers decide which is the best way of travelling. In the world of Business Insider there are seven ways to travel eastwards and get some NY beach heaven in. This spectrum includes driving yourself, taking the train – the Canonball or the LIRR local, the bus (go for the famous Hampton Jitney like Carrie and her gang or move upscale just a tad with the Luxury Liner), hiring a car service or travelling by chopper or seaplane. These options range from $20 to $3200, or in transportation terms: from the Mad Train to the Onepercenter Chopper, the two extremes on the Hamptons Travel Scale.

Scrambling for space
‘On a Friday, getting a seat on the train to the Hamptons is somewhat similar to scoring a seat on the last chopper out of Saigon. It’s pure chaos. As if Penn Station during rush hour wasn’t already crazy enough, add hundreds of twenty somethings knocking people over with their beach totes scrambling for space on the train and it reaches feverish levels’, elaborates Price Manford who considers the Hamptons his home away from home away from home (Texas is his real home).

Apparently Price is a man who’d rather run for the last chopper out of Saigon and spend that flight with scores of bros and boozers than get stuck in traffic on the Jitney or Luxury Liner: ‘I don’t want the added variable of traffic with the bus, which can be brutal because at a certain point there’s only one road in and out of the Hamptons.’ I got stuck in traffic with my husband when we were off to the Hamptons mid July. It took the Luxury Liner about three hours to reach our Southampton destination (versus two hours when you take the train). But since I spent these hours on a quiet coach, with other New Yorkers minding their own business, on a comfortable seat with a reclining option, refreshments and snacks available for free, a clean toilet and a switch-your-brain-off-movie, the traffic variable feels trifling to me. Also, we could make a reservation for our seat. ‘You definitely don’t want to get stuck without a seat on the train, there is limited reserve service but I’ve never heard of anyone using this’, says Price. ‘Most trains require a transfer which causes another mad dash across platforms for seats.’ Be prepared to stand or sit in the aisle or on the stairs if you’re taking the train. Surrounded by twenty somethings taking the edge of their week by downing Bud Lights and lukewarm wine from plastic cups. In my opinion common sense is a quiet ride on the Luxury Liner. If this makes me sound old and far from the youthful 32-year-old that I am, so be it.

Private Beach Air
If you’re rich and famous though, common sense most likely turns into travelling by air to get some beach air in. One percenters don’t have to suffer from the humiliation to get stuck in traffic with their full-size luxury SUV or limousines with tinted windows, since Gotham Air and Blade will get them to their villa within half an hour. Blade call themselves the ‘first digitally driven short distance aviation company’. No membership is required, all you have to do is download an app and off you go. Scheduled flights are in a price range from a mere $595 to $1250 for a single seat, depending on the route and the type of helicopter or a slightly more adventurous seaplane. It might be a worry-free situation for those travelling with private charters, but all this choppering is worrisome for those on the ground. Their sun bathing and pool time is being intensely disrupted by what Southold Town Councilman Bob Ghosio refers to as ‘a constant bombardment of noise’. In order to fight this noise onslaught, citizens unite in the Quiet Skies Coalition (QSC) since August 2011. East Hampton and Southampton dwellers have joint forces to reduce and eliminate the noise and air pollution caused by the helicoptering elites.

Complaint Engine
Rosemary Caruso owns a house in North Haven (Southampton) with her husband Ken and is a member of QSC. ‘I currently report all helicopter noise on a page called Airnoisereport.com’, she says. They advertise on their website to be ‘the New York Metro Area’s First Community Owned Complaint Engine’. Not only can you submit complaints on the site, you can also review location and dates of previously filed accusations. So far in 2016 32,855 charges have been submitted. ‘Helicopters are not overseen in the same way as planes, they don’t have to log their flight paths, so they more or less fly where they like. They fly over our house whilst they are supposed to fly over the bay water but they take the shortest route’, Rosemary shares. Her daughter Jessica Summerfield latches on to Rosemary’s annoyances: ‘I actually prefer going to visit my mum and stepdad in autumn because the helicopter noise is much less excessive than in the summer when all the millionaires are ceaselessly off to their beach villas’. All in all, this sounds rather bothersome which makes me wonder how the chopper users themselves escape the noise since they reside on the same grounds as the troubled residents. Highly sedated by vodka martinis and Dom Pérignon Rose Gold might be a proper guess. Or maybe they’re too busy screaming on the phone to their lawyer after mistakenly renting out their $20 million estate to some Wall Street snob who left it in ruins.

#Sprayathon
On 3 July 31 year-old Moore Capital hedge fund trader Brett Barna rented a mansion in Sag Harbor to host a charity event raising money for Last Chance Animal Rescue. The event caused Omar Amanat, the owner of the house, to sue Mr. Barna for $1 million because supposedly the party host had about a 1000 party people going nuts spraying champagne, leaving used condoms, stealing art and destroying furniture. As we all know the media are always impartial and Vanity Fair portrayed Barna as an actual Jordan Belfort, Leo diCaprio’s character in The Wolf of Wall Street. The New York Times gave Barna a soapbox preaching ‘the guests weren’t even allowed in the mansion, he had a former police chief and eight security guards keeping the crowd outside and maintaining order and the party was clean-fun with 500 guests (not a 1000) raising $100,000 for the animal charity’. 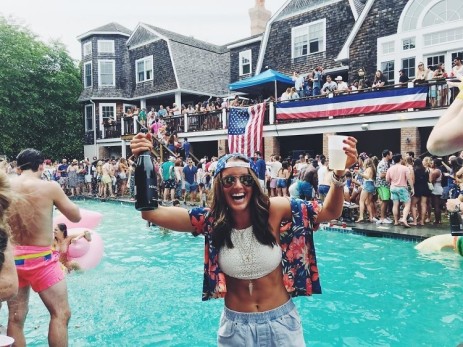 It’s Barna’s word against Amanat’s. If we dismiss their words, we are left with a few interesting facts though. Barna ‘does regret having dwarfs dressed in red-white-and-blue suits carrying champagne guns’, there were women in the pool floating on pink inflatable flamingos and rapper Ace Hood performed at the party from the balcony above the pool – also armed with a champagne gun. Barna’s party went viral on social media with the hashtag ‘sprayathon’. When this happened Moore Capital fired Barna from his job releasing the statement ‘personal judgement was inconsistent with the firm’s values’. Mr. Amanat was arrested by the FBI on July 13th at his New Jersey home with charges unrelated to the Hamptons house. He is indicted with four counts of fraud, including conspiracy to commit wire and securities fraud related to a tech start-up called Kit Digital. This year it was Sprayathon, but according to the New York Times ‘every year a Hampton house party spins completely out of control and becomes an example of wealth gone wild’. If you’re not a Hampton house owner either shouting to your lawyer or filing noise complaints, you will probably spend your summer as a well-behaved house guest – like me and my husband – or like train traveller Price, who spends his Hampton summers sharing a place with friends, as many New Yorkers in their 20s or early 30s do: ‘When we were younger and poorer we piled lots of people into a house to make it affordable. As I’ve gotten older and less poor the total house members have slimmed down, thankfully, and our nights are more dinners and wine than parties and twenty beers.’ I think it’s safe to say, neither Price nor I will make the headlines.

Truly beat the heat
So, New Yorkers might leave the city trying to escape the summer heat, but Hampton like a true New Yorker and you’ll still find yourself overheated. In your attempt to flee the furnace city, trains cause feverish hunts for seats, choppers lead to heated debates amongst the rich and the richer and house rental gets you into hot law suits with owners. Looks like turning on the AC magic might be the only way to truly beat the heat of a New York summer…

Check out these links if you want to get your Hampton on: